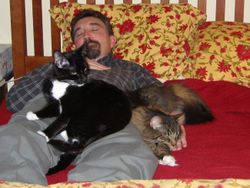 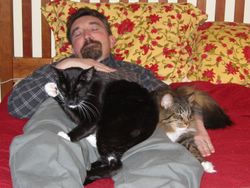 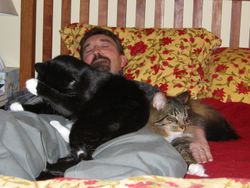 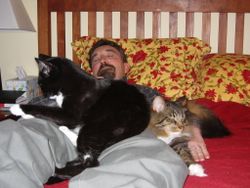 Paul works hard to attend to all of the cats’ needs. Some afternoons, the cats need a pillow… or a bathtub.

Last Sunday afternoon was gloriously sunny, but cold. The cats availed themselves of the patch of sun in our bedroom. Light, shade, shadow and happy cats – I grabbed my camera. Today’s another bright cold day, making a lie of the idea that it rains all the time here. 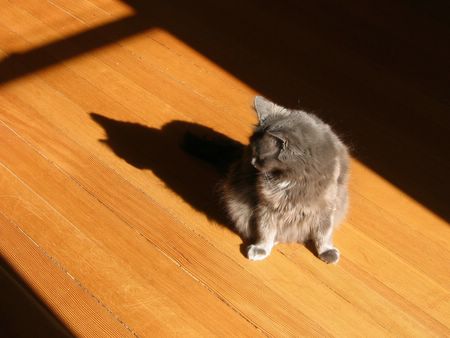 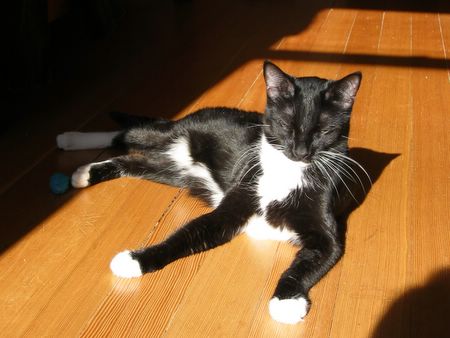 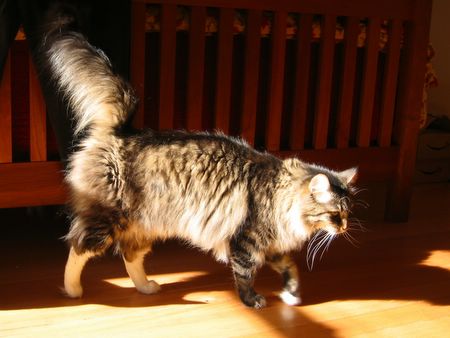 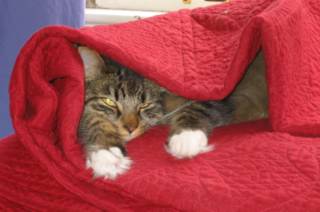 Ever had one of those days when this was about all that you wanted to do? When you’re a cat, no one expects anything more of you than this.

I walked into our bedroom this afternoon to find that Sasha had burrowed his way into the quilt folded on our trunk. This was the view at one end; at the other, two tufted white paws poked out. When I snapped his photo, he opened his eyes a little more, yawned, then went back to sleep.

Paul and I both love each of our three cats, and I believe that, in keeping with their own temperaments and feline understandings of love, the cats love us. However, Sergei and Paul have a special bond.

When we went to meet Sergei and Sasha, it was the fluffily beautiful Sasha who won Paul over to the idea that we might have three cats. Within moments of our arrival at their foster mom’s house, Sasha had settled into Paul’s lap, with his motor on full throttle. Sergei, while cute and playful, was not a lap cat. He just wanted to play, play, play… which is, in itself, an utterly charming trait in a kitten.

For a few months after we adopted them, this pattern held. Sasha was affectionate; Sergei was acrobatic. Sasha curled up in a lap, while Sergei bounded across it on the way to someplace more exciting.

Do cats have “teenage years,” and is that how we might explain the changes in our boy cats? Early on, the boy cats were deprived of the opportunity ever to experience puberty, but as they grew up, something led to changes in their personalities. Sasha became more reserved, and a bit of a loner. While he still loves to be held, he rarely seeks out his people… though often, after we are asleep, he will curl up next to me, or on top of Paul’s feet. Sergei, on the other hand, became a lover. And he particularly loves Paul. He frequently – multiple times during any given day – climbs onto Paul’s chest, where he will nuzzle Paul’s face, and snuggle, purring, for long periods. He drapes himself along Paul’s leg, holding on while Paul rubs him. Sometimes he falls asleep sprawled across Paul’s body. We refer to this state as “occupado,” as in, “I can’t blog right now; I’m occupado.”

When Paul came home from the hospital, Sergei was very careful around him. If fact, as Paul noted at the time, Sergei did not reclaim his place on Paul’s chest until I was sleeping in our bed again, too. He is now regularly keeping Paul “occupied” again. This clearly makes Paul happy. 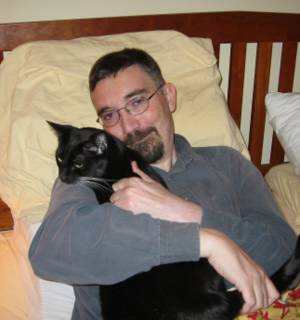 A boy and his cat, in a typical pose&nbsp 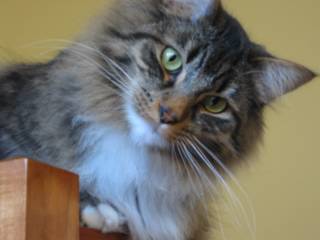 Sasha has a new imaginary friend. They’ve been playing hide and seek, with Sasha seeking. That’s the best explanation I can come up with for his behavior this morning.

Sasha looked for his imaginary friend all over the upstairs of our house. He looked in every closet (including the mysterious closet, which, thanks to some tidying, now has an open door policy). He looked on top of, under the covers of, and under both beds. He did a thorough search of the bathroom; he looked behind the toilet, in the bathtub, even up into the tub faucet. (His imaginary friend must be small.) He tried to get into places where only an imaginary friend could go (inside the walls, for instance). All the while, he made little “where are you?” sounds.

I think his search was eventually successful, though I don’t know for sure. At any rate, the little seeking sounds eventually stopped. However, he seemed pretty worn out from it all, and this afternoon retired to the stack of t-shirts on a shelf in Paul’s closet – until today Sergei’s secret domain – for a long nap.

Speaking of Sergei, he just came into my office to complain that I never write about his very interesting pursuits. He’s arching his back, and saying, “me me me now.” He is right on both counts; I haven’t written much about him, and he has some great stories that really should be told. I also haven’t given him his bedtime snack, so maybe he’s just hungry. I’ll take care of the snack first, and if that’s not what he wants, I’ll come back and write more tonight…

This post is courtesy of a new feature from Blogger that allows us to post digital photos directly to the blog. Google, which owns Blogger, has teamed up with a company called Picasa, which has a little software program called Hello. From what little I’ve seen (because I just learned enough to get these photos up), it’s sort of like IM for photos. I think Picasa is hoping that the thousands of us using Blogger will tell all our friends, who’ll tell all their friends, etc., etc. If you have a Blogger blog, it’s free; I don’t know what, if anything, they’d charge the rest of you.

For those of you who haven’t met them, these are our three beautiful cats: Lyra, Sasha and Sergei. My photos don’t do them justice; they’re even more beautiful in real life. 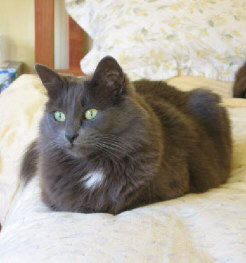 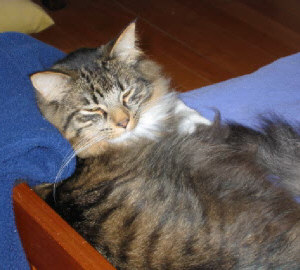 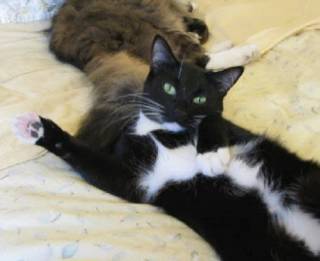 “There are two means of refuge from the miseries of life: music and cats.” – Albert Schweitzer

Late this afternoon, our cat Sasha comes into my office. He walks over to the closet door (which I keep closed because there’s lots of stuff I don’t want to look at in there), and starts going on as if Everything Good that a cat might want is right behind This Very Door. He stands up, wrapping his front paws around the door knob (he’s a long-bodied boy, our Sasha), sticks his nose against the edge of the door, snuffles loudly. He flops over on his side, sticks all four paws and the tip of his nose under the door. More snuffling. (The large gaps under some of our doors are a result of the previous owner’s installing wall to wall carpet, which was the first thing I ripped out. The cats know only that the gaps are larger than paw size, and are therefore Big Fun.) Then some wriggling around on the floor in an attempt (I assume) to see under the door, which results in Sasha flat on his back, two paws under the door, nose pressed tight against it. Can he see anything in there? Who knows. All this is accompanied by tiny mmmrrrrr-ing sounds that I can’t quite interpret. Is he saying, “the answers to all the secrets of the universe are behind this door, and I must learn them now,” or “something smells really good in there”?

Curious to see what he’ll do, I walk over to the door and open it. As the closet is revealed, Sasha begins to purr. (Well done, good and faithful servant.) He walks struts the full length of the closet, rumbling loudly, pausing occasionally to sniff a box, look on a shelf. I’m leaning against the door frame, laughing. At the far end of the closet he makes a perfect runway model’s turn, walks partway back, sits down, and looks up at me. He’s still purring. I’m still laughing. I ask him, “Have you seen enough, Sasha-bear?” Not wanting to answer too quickly, he grooms one fluffy paw for a few moments, then ambles out of the closet. I close the door, and come back to the computer. After careful consideration, Sasha picks a good spot on the sofa, bathes a bit, and goes to sleep.