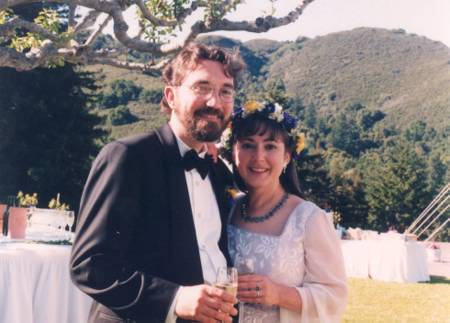 …Paul and I married. One of the readings at our wedding was this excerpt from Anne Morrow Lindbergh’s A Gift from the Sea:

A good relationship has a pattern like a dance and is built on some of the same rules. The partners do not need to hold on tightly, because they move confidently in the same pattern, intricate but gay and swift and free, like a country dance of Mozart’s. To touch heavily would be to arrest the pattern and freeze the movement, to check the endlessly changing beauty of its unfolding. There is no place here for the possessive clutch, the clinging arm, the heavy hand; only the barest touch in passing. Now arm in arm, now face to face, now back to back – it does not matter which. Because they know they are partners moving to the same rhythm, creating a pattern together, and being invisibly nourished by it.

The joy of such a pattern is not only the joy of creation or the joy of participation, it is also the joy of living in the moment. Lightness of touch and living in the moment are intertwined. One cannot dance well unless one is completely in time with the music, not leaning back to the last step or pressing forward to the next one, but poised directly on the present step as it comes. Perfect poise on the beat is what gives good dancing its sense of ease, of timelessness, of the eternal.

Today is our sixth wedding anniversary.

We celebrated our first five anniversaries with fine food and, when possible, travel. We spent the entire day and night of our first anniversary on a flight from San Francisco to Rome. That day was definitely just about travel. However, the following weeks in Umbria and Tuscany were filled with fabulous food (as well as buildings, the countryside, and violins).

We left the country again to celebrate our second anniversary. Living in Seattle makes getting out of the country dead simple; we just hopped a ferry to Victoria for a couple of days. We spent a night at Sooke Harbour House, and had a wonderful anniversary dinner watching the sun set over the Olympics. We joked after that trip that we would leave the country for each of our anniversaries, but we haven’t managed to do that again… yet.

Anniversary #3 found me at a new job, with too much work and no vacation time. So Paul and I played tourist for an evening at one of Seattle’s best-known tourist attractions, Pike Place Market. We had dinner at Place Pigalle, spent the night at the Inn at the Market, and wandered around the market the next morning as it awoke.

On our fourth anniversary, we travelled far enough away from home to get out of the country, but, given the direction of our flight, we ended up in Boston. (We were on the way to my 20th college reunion in Providence.) Paul and I both have lived in Boston, and both love it, but we hadn’t been back in quite a while. We stayed in a small Back Bay hotel, a block from H.H. Richardon’s magnificent Trinity Church (which is near the top of my favorite buildings list). Dinner was at Casa Romero, a lovely, romantic Mexican (yes, Mexican) restaurant. Really nice interior Mexican food, and a fine margarita. In Boston. Go figure.

Last year, our (fifth) anniversary fell on Memorial Day Weekend. We chose May 23 for our wedding because it was the Saturday of Memorial Day Weekend in 1998; having our wedding and some future anniversaries on 3-day weekends seemed like a nice idea. However, if you live in Seattle, and are active in the folk music and dance community, the place to be for Memorial Day Weekend is the Northwest Folklife Festival. If you want to celebrate your anniversary dancing/performing/hanging out at a 4-day party with over 200,000 people, Folklife’s the place for you. Paul and I want something a little more intimate, at least for an evening. So last year, we skipped out on Folklife, and had a fabulous 3-hour dinner at Le Gourmand in Ballard. Glorious food, with perhaps the best sauces I have ever eaten.

Needless to say, this year was a little different. Neither travel nor food figured in our celebration. We were at home, and had a quiet Sunday morning in bed with the New York Times. For an anniversary treat, Paul made a mocha for me, rather than the usual latte. (OK, so that’s a little bit of food, but the only reason that it’s important is that Paul made it for me.) I had a small anniversary present for Paul; the cats loved the ribbons. He gave me a beautiful card; the enclosed letter made me cry… which made him cry. We talked about how this was not at all what we’d expected from this year, and that we are so glad that Paul’s still here, and that we are together. It was a lovely morning, a celebration of the small, everyday pleasures and extraordinary experiences that we have shared.

This afternoon, our friend Bruce called to wish us a happy anniversary. He noted that we’ve been really testing out the whole “for better, for worse, in sickness and in health” thing. He’s certainly right about that. So let’s just put a big check in the “in sickness” box on the marriage to do list, and go on to something else for a while.

And next year, watch out. We’re due for quite a splash out on our anniversary.

Some of you may not know that Paul and I met on Valentine’s Day in 1981. Paul had just transferred to Brown; I had been there for a year. My friend Melinda told me about a Valentine’s party hosted by another transfer student, and we went. Who was throwing the party? I don’t remember. (Paul can remember his face, but not his name.) Where was it? No idea. I know we walked, but I know that only because none of us had cars. Snow on the ground? Probably. All that detail is long gone.

What I do remember is walking into the living room, where this cute guy was dancing with my friend Oona. Melinda introduced us (it was Paul), we chatted briefly, then Paul and Oona kept dancing. He seemed quite taken with her. I don’t remember much about the rest of the party, either.

Not much of a story, really. The story didn’t really start to get good until a couple of days later, at Melinda’s birthday party. By then, Paul had learned that Oona was involved with another woman, and therefore was not really available to him (in more ways than one). That was the night that we sat up talking for hours for the first time… but that’s another story for another night.